How to Change Free Fire Server-Because Free Fire is a game that has quite a lot of enthusiasts, and this is not only in Indonesia, but abroad there this game has also begun to be recognized and played by many people. Each country certainly has its own server and it should be noted that in each server there must be differences, for example in terms of events, items, characters and others.

One of the things that made Indonesian servers jealous of other countries was when Free Fire Max was present yesterday, which is very unfortunate that our server was not given the opportunity to try to experience the excitement of using the Free Fire game with ultra HD graphics. For those of you who want to feel the excitement of playing this game on an overseas server, then you can follow the tutorial that we will share this time regarding how to replace a free fire server using foreign servers such as India, Brazil and other countries.

How to Change Free Fire Servers

So that we can play using foreign servers, the first thing you need to prepare is to install a VPN first, this application is very popular for those who want to access blocked sites, but you can also use this VPN to change the FF server, how do you do it? you can follow the steps as follows.

Those were some steps to be able to play free fire using foreign servers, very easy right? Then is it possible to change to an Indonesian server, here is the answer. 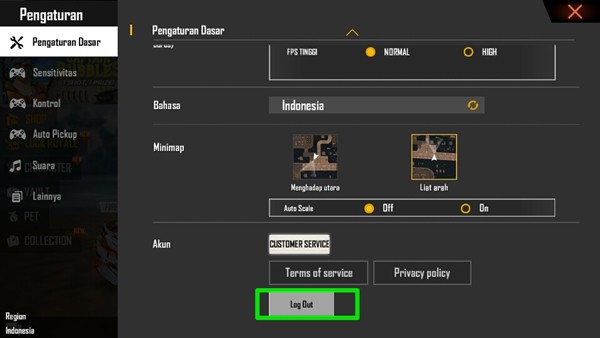 How to Return to Indonesia’s Free Fire Server

After we get what we want from a certain country server, then we can then go back to the Indonesian server, which is as follows:

To try out how to have fun playing in other countries, you can try to keep changing according to what you want, if you fail then you try again until it works.

Disadvantages of Playing Using a VPN

One of the drawbacks when playing using a free VPN is that the connection is slow so that games often experience loading, to be able to optimize it you can use a premium VPN, by upgrading it or subscribing either monthly or full for one year.

The factor that most influences the comfort of playing games is internet speed, because if the connection is slow it will make the game experience lag or breakage.

Is It Safe To Use An Outside Server?

This method is a safe way, so you don’t have to worry about our account being banned or other sanctions, and in connection with this trick using a new account, we also don’t need to be upset when things happen that we don’t want, because we just have to create a new account. .

Is it possible to move servers without changing accounts

Some of those who have tried this method can be done even without changing their account first, so you can try it. The reasons for someone to change this server do vary, but most people really want a prize from an event in the country there.

That is the brief review that we can share with all survivors friends about how to change the ff server using a foreign server, good luck.